Noël Somé or Techno-agricultural Revolution on the Move! 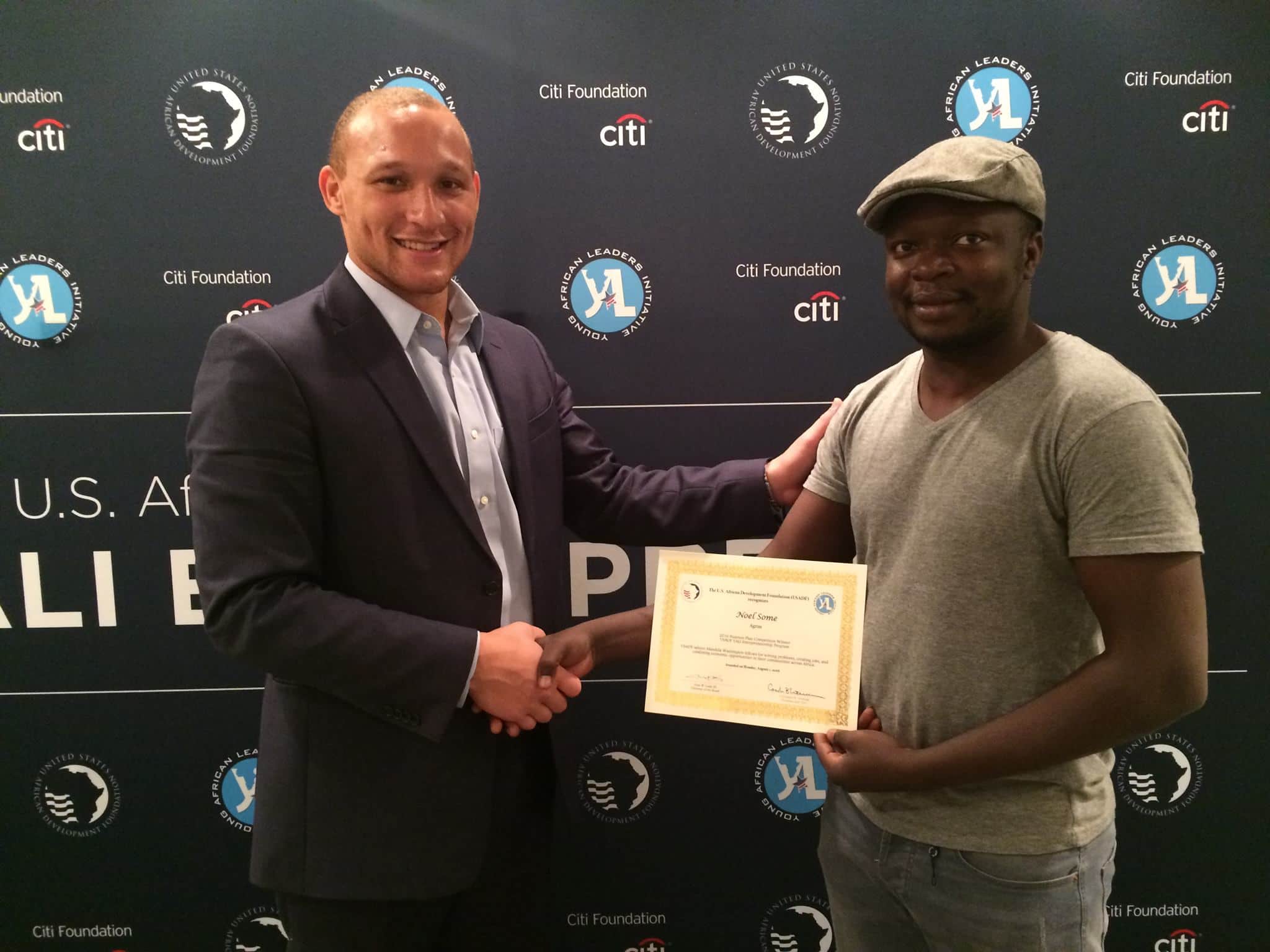 Noël Somé or Techno-agricultural Revolution on the Move!

He is a young agritech entrepreneur who lived in Boston for about two months (June-July 2016), where he defended his project called ''Kakworo'' at the Mandela Washington Fellowship, an initiative which brings together nearly a thousand young people from around the world. As part of the YALI (Young African Leaders Initiative) programme initiated by President Barack Obama, he even received the US Foundation for African Development Award. Noël Somé, our guest, is a young passionate entrepreneur, trained at Burkinabe Institute of Arts and Crafts (IBAM). In this interview, he is presenting his project and his vision of entrepreneurship.

AE: Could you tell us about Kakworo project?

Noel Somé: The Kakworo project was initially a communication project, because I drafted it last year.  I presented it during other competitions at CFI (Editor's note: Canal France International) as actually a communication project and it was among the 12 best projects. Meanwhile, I had to go to Paris for that purpose, but unfortunately my visa application was unsuccessful. Therefore, I travelled to the United States, that year, and worked on the same project, but with some nuances because the version submitted to the CFI competition was more geared towards communication and journalism. The competition, which was online, mainly focused on journalism and web development. This was what happened before I travelled to the United States. When I got selected to go to the United States as a YALI (Editor's note: Young African Leaders Initiative), I still had this project in mind because I knew that it was relevant. So, I decided to work on the same project by focusing on and highlighting its social impact. Basically, the Kakworo project is a multiplatform of communication targeting rural agricultural communities. The project was developed based on the following observation:  many people have mobile phones and access to different networks, including farmers. Often, they do not know its use given that they do not have enough contacts. I live here (Editor's note: Ouagadougou), but I have brothers and cousins in the village. At first, they were always beeping me. It is true that the phone is used for business in town, but people in the village use it because they want to be up to date with new technologies, and impress others. Often, they do not know its usefulness. I thought we could provide them with useful information through their phones. Moreover, I believed that rural populations need information, at least on their main activities, which are agriculture and livestock farming. Given that many of them have a phone, it would be necessary to help them use it wisely. Consequently, I came to the conclusion that an SMS platform connected to a voice kiosk in the national languages would make it possible to disseminate information. In other words, we will collect information on the agricultural market and disseminate it through voice message and SMS because some of these people can read. This technology will enable these people to discover another way of using phones.

AE: Concretely, how do you intend to implement this project?

Noel Somé: First of all, I am in the process of setting up the platform. Then, I will have to work with other people to collect the necessary information. Some institutions already have data on the market. We can work with them to disseminate the information, failing which, I will get in touch with some of the major strategic markets to collect and disseminate the information. Let us take the case of the Southwest Region. I can appoint someone in Dano who, depending on our collaboration, can weekly or daily, disseminate information on prices of millet, corn, cowpea or on how much a goat, fowl costs, etc. This information can be sent not only to farmers in Dano but also to neighboring cities because the idea is to disseminate information to other cities or villages.

AE: Are you, then, starting with Dano?

Noël Somé: Not necessarily! In fact, everything will depend on the meetings I will soon have with some of the stakeholders from the agricultural sector. I am already familiar with the agricultural sector. So, for the next step, I will meet the stakeholders who, for me, are from this sector. Indeed, I want to rely on a pre-established network to get started. It is necessary to have an organized environment where you go through the chief to disseminate information. In this case, data can be easily accessed because they are indispensable. Better said, when you take a farmer's phone number, you will have to specify the language they speak so that they can understand the information you will send to them. It is also important to disseminate information on good farming practices. To this end, I will work with specialists of that domain.

AE: Concretely, how will this information be disseminated?

Noël Somé: For instance, good farming practices can be disseminated through voice message. We can already do one-minute simulations to explain the process to people. We can go far, and in fact, we will go far. We can provide interested farmers with an interactive system.  That is, for instance, as soon as you sow, the agricultural speculations will be saved and you can send the date to the system, which, at the right time, will remind you of the next action to take. This will be implemented by the agricultural technicians who will initiate, for example, the entire process and the algorithm of the process of those speculations. Some agricultural speculations are often difficult to control and that is where we will focus on. Farmers will be able to send just a text message if they sow today and they will be reminded of dates and activities to complete (hoeing, fertilization...). This initiative will educate people on specific speculations. This is also interesting because it will be easy for people who want to develop new agricultural products, whether they are NGOs or other companies. Farmers will then have the information and use it.

AE: Have you already set a deadline after which the project will likely start?

Noël Somé: Normally, the project should kick off by the end of October or early November. We will first set up the platforms, which will be our main working tools.  We will mostly interact with farmers and where necessary, also through farmers' groups, etc. In this sense, these platforms constitute an effective communication tool because, as I said, farmers do not know how to manage a number of things. It is worth noting that between 2011 and 2013, I managed a company, which is still operating today, but we are moving to something different. Soya production was introduced in the villages, but many people do not master the technical aspects.  Many have failed.  So, I think such a platform can effectively educate them.  This is a platform that sensitizes farmers and which enables them to send a text message.  If they sow today, they can send an SMS and the platform will guide them in information dissemination. Farmers will assume they do not need information, when the speculation is known to them, but it is worth noting that we cannot control everything. For instance, some NGO's want to test some products but are unable to do so. If there is a well-established platform, they could use it to disseminate information.

AE: What are, then, your financial and technical resources?

Noël Somé: Financially, USADF will support me (Editor's note: United States for African Development Foundation) up to a certain level. As for technical resources, I am an IT expert. I have already developed SMS and other applications. Of course, I will work in collaboration with other friends who are specialists to set up this platform. And after that, I will work with partners that master rural communities to create projects that farmers can own.

AE: Young people are increasingly interested in entrepreneurship. Do you have any advice for them?

Noël Somé: As I have always said, young people must believe in themselves. It takes courage to become an entrepreneur. Often, you must turn down certain job offers. If we wanted a job, we would certainly have been employed. But we refused some positions because we had other visions. I think young people who believe in their project must have the courage to turn down some offers that do not suit them. We are not saying that they should refuse everything. It depends! It is up to everyone to judge, but young people must not follow what everyone is doing. We will be stuck and we will not achieve anything great just by following others because if we do what others like to do, the result will always be the same. Young people must be open-minded and must not put any limits on themselves, not even technological or linguistic barriers. I defended this project in an English-speaking environment. Nobody understands French there. I struggled as a francophone to defend it. This means that I was convinced that language should not be a barrier because when you have good ideas, it is through language that you can defend them. Of course, these young people should take interest in English and the English-speaking world. Finally, they must embrace technology. Today, young people do not have interest in technology when it is not used in their field of study. They will never get far because technology is not a matter of being a technician or IT expert. It is a working tool. I would like to conclude by saying that I am available to help young people, working both in the technological sector and projects development, to get funds because this is the fourth time I have won grants (awards).